After, a cold spell, the weather had been great lately. Perfect for taking a fall trip to see the gorgeous colors of the leaves and experience some nature! I took a trip to Yeongju City (영주시), and my, the scenes were breathtaking!


I was looking for things to do on a weekend, and I found this trip to Yeongju City on The Seoul Expat Global group. The group is headed by Harry Yoon, and it acts as a travel agency of sorts.

This trip in particular was a Sunday day trip to Yeongju to see the Buseoksa Temple, the Museom Village, and a local ginseng market. In addition, we saw the process of making tofu and harvested some sweet potatoes. Lunch and transportation was included. All of this was for only 20,000 won! That's because the trip is partly sponsored by the city itself to attract travelers.

After taking a bus from Seoul, we arrived at the temple after the three hour ride. Anyone can get there from the Yeongju intercity bus terminal by taking either the #55 or #27 bus.

Buseoksa Temple (부석사) is an old temple that was built back in the year 676. It's large and has a fantastic scenery. You can read more about its history here.

When we arrived, we immediately saw hot gorgeous the grounds were. The weather was perfect and the autumn trees looked great. There were many hikers there to take advantages of the temple grounds. We were able to see old buildings, including a shrine and a grave. There was a tour guide as well that spoke English perfectly.

They also grew apples on the temple grounds. I was told that this region was known in Korea for its delicious apples. Visitors were able to go back and take pictures of them and they're able to pick apples for themselves for 1,000 won each. Each of us bought at least one apple! If one isn't enough, the ladies sold bunches of apples for different prices, depending on how many you want.

This isn't a place that's full of activities, but rather a place where one can go, relax and soak up the atmosphere. It's a peaceful place. We were also told that on a perfectly clear day, you could see the mountains up to a far distance.

Next, we took a truck up to a small locally owned farm. All of us had to ride on the back of a white truck, since the tour bus would have been too big. That sounded interesting to me, but it did scare one of the other travelers!

Here, the first thing we saw was the making of Tofu. I actually didn't get much of this in detail since there was no English speaking guide for this part! As a result, I could only look to see what was happening. First, they use the stone machine thing on the left and turn it to smash it. After that, they showed us how to beat some of the plants, and finally they showed us the tofu cooking in the big black pot. They let us practice using the tools.


Next, it was time for lunch. We had bibimbap! Bibimbap is one of my favorite Korean dishes, so I was certainly happy. They had red pepper paste we could put in it to make it spicy. We were all taken into a room with a heated floor to eat lunch together. Here, we introduced ourselves to each other as a group.

Later, we were taken to the back where they had a sweet potato crop. There were tons of older people already digging away! Here, we were given a shovel and a plastic bag in order to dig up the sweet potatoes and put them in our bags. We started digging. I like sweet potatoes, but I don't eat them often. I figured I would be satisfied with just three, while the others in our group stuffed their bags with them! They were free, so why not? (Well, in my case, the rest would just get moldy!)

Later, we went to the Museom Village (영주 무섬마을). It's an old Hanok village next to water. When we went here, we mostly took pictures on the flowery path and spent the rest of the time at the water.


This also had good scenery, especially since it was on a river or pond. Over a water, there was a makeshift narrow bridge made out of wood. This is the main attraction. On the wood, visitors could walk across the water and back. It looks really nice and seemed cool, but I didn't do it myself. There were too many people on it when we were there. That meant that there would be virtually no room if you wanted to turn around or go around someone. There's also the risk of falling, of course!

On the beach, there as a wooden plank over another structure that looked like a seesaw. One of the Korean tourists explained that this was a game, called Nolduigi. Basically, two people stand on either side and coordinate to make the seesaw go up and down. If you fall off, you lose. It looks easy, but I found out it was quite difficult after trying it myself. One thing is true, it's a simple, fun game!

Our final step was a local ginseng market. It wasn't really spectacular, but it had a bunch of shops inside of a building that sold mostly the same thing.

It was good, since one shop was giving out free ginseng tea, and after that we shared ginseng makgeoli. Makgeoli is a popular Korean alcoholic drink, which is made from rice and has a milky texture to it. I wasn't a big fan of the tea, but the makgeoli was good.

After that, we hopped back on our tour bus to head back to Seoul! I initially had my doubts, but I really enjoyed this day trip!

As far as the agency is concerned, it's called the Seoul Global Expat group, and one can easily sign up to go on trips with them through their page on meetup.com. I like them because they're always having trips of all sizes, and the organizer, Harry Yoon, also hosts smaller get togethers during the week. If you're traveling through Korea and want to save money, you can try his or similar groups rather than hitting up the big expensive agencies. Let me remind you that all of this was for only 20,000 won.

Another plus is that he's crazy for pictures, which is a good thing. You get good photos out of it! 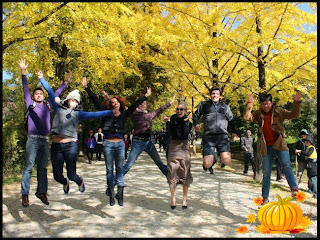