Going to the coffee region in Colombia was one of the most memorable parts of my travels in that country. I went there when my mother came to visit me in July 2012. I can't believe it has almost been a year!

We traveled to this part of Colombia after exploring Bogota, the capital city. This was the most challenging leg of our trip, hands down. That's because we ran into a major problem not long after arriving. I'll talk about that later.﻿﻿﻿﻿﻿﻿
﻿ ﻿
﻿


﻿﻿﻿In the morning, we got our things ready and took a taxi to the bus terminal in Bogota. We had booked a place to stay in the tiny town of Salento. However, there were no direct buses, so we had to take a bus to Armenia, the closest big city.

The trip took about 9 hours and the ride had impressive views of the mountains in Colombia. It was windy/loopy, however. Headache medicine if useful for those who get dizzy!

From the bus terminal in Armenia, we had to go to the back of the terminal and go outside where we could take a smaller shuttle to Salento. For a few bucks, we could take the shuttle and arrive to Salento in about 40 minutes.
﻿
﻿
Salento, Quindio, Colombia

The shuttle took us to the main square of the small town. It looked very simple and had a beautiful backdrop of the mountains surrounding it.


When we got there, we went to find the hostel since we arrived in the evening. We eventually snapped some photos of the main square and in front of a statue of Simon Bolivar. Looking around, it was very touristy and there were a bunch of shops, restaurants and bars around the main square and along the side streets. You could see plenty of tourists among the locals.

We did just a tad bit of shopping. I knew I would need a pair of sneakers, so I bought one pair of those along with a pair of sunglasses. They sold all of the typical stuff that you'd find in touristy shops in South America, including the clothes, souvenirs, etc.

We didn't interact with many locals, but they were certainly warmer than the people in Bogota.

The weather in this spot was beautiful with mostly clear skies and comfortable temperatures. I couldn't imagine having weather like that year-round! I'm no fan of winter, so I would trade any day.


I booked a room for us at a hostel called "Las Palmas." Since Salento, like most if not all places in Colombia, is organized in calles and carreras (streets and avenues), it was pretty easy to find and there was a sign outside of it.
﻿


I had booked the room through a website, but much to our dismay, the owner told us that he had given away our room to a walk-in. When I asked why, he stated that it was because we arrived two hours after we said we would. What? I then explained that I had left my contact information, including my e-mail and cell phone number. The owner hadn't even tried to contact us before giving the room away. Needless to say, this was very frustrating for my mom.

We were tired, and they directed us to different room we shared with three other people. There was a European couple and an American man traveling alone. My mother and I enjoyed chatting with them. The beds were soft with warm covers and the showers were nice and hot. The next day they moved us to a room with three beds, in which we would be staying alone.

In the mornings, the lady of the hostel treated us to breakfast. She prepared everything fresh, which was quite nice! She cooked eggs to order and prepared toast and fruit for us. It was good for lightening up our moods.

It was a charming little place with one computer we could use and there was a resident cat. 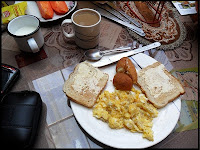 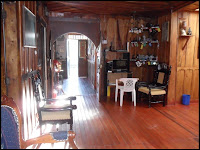 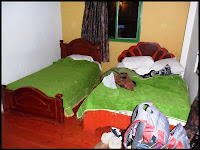 
Next, we went to Cocora Valley, or Valle de Cocora. To get there, we simply walked back to the main square and saw many jeeps lined up beside it. The drivers solicit tourists looking to go to the valley, then load up the jeeps with them. Mom was afraid of riding in the back, so she sat up front with the driver. I sat in the back with the others. As my mother was getting in the jeep, another lady on the jeep commented to her daughter that my mother was a gordita, or that she was chubby. I let her know what she said. In my opinion, it's a tad rude to make snide comments about others knowing that they can't understand you.

The trip took about 20-25 minutes and the jeep picked up some women from Argentina on the way. The next thing we knew, we were at the Valley.

The views were breathtaking to say the least. Along the dirt road, you could see out to the valley. The valley was full of bright green vegetation with hills and mountains in the background. Scattered along the valley were the wax palm trees, which are protected in Colombia. I think the scenery was more impressive in person than in pictures.
﻿


The hostel recommended a horseback ride, so we decided to give it a shot. After a couple of initial misunderstandings, we ordered a two or three hour ride on horseback. There's basically a defined trail that the horses follow. One thing I hadn't taken into account was that my mother hadn't ridden a horse before, and as a result, she was easily spooked while on her horse. Since the trail was a daring one, the guide decided to just have us walk around the very beginning and ending of the trail, which was flat land and not as intimidating for my mom.

We got off the horses and went on a little walk. There's a full hiking trail for anyone interested, but we aren't hikers really. We were able to relax and take in the scenery. After that, we went back toward the entrance, chatted with some other tourists, and then went to a small restaurant for lunch. We tried their famous trucha, or trout. We ran into the man who was traveling alone and had a coversation with him. We determined that he was pretty brave. 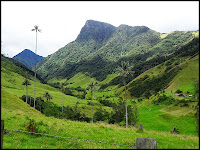 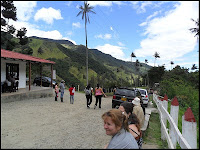 After finishing at that restaurant, we noticed that we needed to get more money. This was where our problems began.

ATMs and (No) Money?

I thought we would have been okay because I knew that there were ATMs in Salento and that I could always go to Armenia if I needed to. In Bogota, I knew that some ATMs worked and some didn't. But I always had access to my money without an issue.
﻿


Come to find out, there was only one ATM in the entire town, and that was located at the main square. It was from a tiny branch of the Banco Agrario. I had never heard of anyone having problems, so I was confident that it would work. Man, was I wrong!

Basically, the ATM wouldn't work with either of our cards, so we ended up in a pickle. We had to swallow our pride and ask the owner of the hostel to loan us some money to get to Armenia. When we got to Armenia, none of the ATMs at the terminal worked there, either. I knew a bank that always worked for me -- Banco de Bogota -- but no one around could help me pinpoint a location. We had to give up and go back to Salento.

To solve the problem, we had to use Western Union. We frantically called relatives and they loaned us some money. There was no location in Salento, so we had to go all the way back to Armenia and use a Western Union location at the terminal. We finally got some money, and were able to continue with our trip. Unfortunately, we lost time due to all of this. I wanted for us to tour a coffee finca while we were there, but we didn't get a chance to do that.

As a safeguard, I recommend carrying enough cash with you to last you throughout the coffee region, since there's no guarantee that the ATMs will work with a foreign card.


Next, we wanted to hit the hot springs in Santa Rosa. From Salento, that meant that we had to take a shuttle to Armenia, a bus to Pereira, and another bus to Santa Rosa. I originally thought that the bus from Pereira would take us directly to the springs, but turned out that we were supposed to take another bus from within the town. After some minutes of confusion, we ended up hitching a ride on the back of someone's pick up truck, which is a normal thing. We paid a few bucks for that, and finally arrived at the springs. My mom was frustrated after all the effort it took just to arrive.

There are basically two places where you can enjoy the Hot Springs (Termales de Santa Rosa de Cabal in Spanish). There's one place, called Balneario, which is more of a park with a waterfall, a few thermal pools, and a river where you walk barefoot. There's also another place, which is located at a hotel. They're supposed to be natural, but it's more expensive, especially if you're not staying at that particular hotel.
﻿

We went to the springs at Balneario and it cost us about 30,000 colombian pesos each (about $17-18). It was very much man-made, but it was very beautiful and natural looking. It was also well kept and not dirty unlike other places in Colombia. We changed our clothes in the bathroom and enjoyed the water. The pools were all of a good, warm temperature, except for the waterfall, which had much cooler water. It was an enjoyable experience. There weren't too many other people there either, but we went on a weekday.

Unfortunately, we couldn't stay there too long if we had any hope of getting back. Soon enough, we started to head back to Salento. We took a bus to the terminal, stopping to pick up my mom's money on the way. As a result, when we arrived to Armenia, we had just missed the very last bus to Salento by a hair. To recover, we had to take a bus to the next town over, Circasia, and then take a taxi to Salento. If you're counting all of the steps just to get back, you can imagine how frustrated my mother was, since she wasn't used to this sort of thing. She certainly let me know on the taxi ride back! 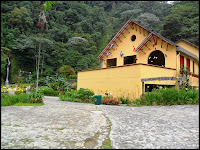 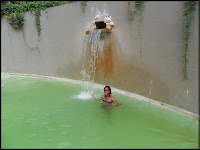 Anyhow, that was our last night in the coffee region. It was a rough ride, but we happily bounced out on a plane ride from Armenia's airport! Our next stop was Cartagena.
Posted by Little Lady at 9:50 PM