This week has been a good one in regards to food. I've cooked some good meals and had a chance to try out some soup at a famous restaurant in Seoul.

After doing some shopping, I decided to try out a restaurant with some folks. The restaurant is called Tosokchon (토속촌) and it is located in northern Seoul, a couple of streets down from Gyeongbokgung station (line 3) exit 2. Walking straight out of the exit, it's about two streets up. After a left turn onto a small street, the restaurant is located a little down on the left side.

Tosokchon is famous for its chicken ginseng soup, or samgyetang (삼계탕) in Korean. Samgyetang is a soup dish of a whole chicken, stuffed with rice, cooked in a broth with Korean ginseng. There are many varieties, but this is the main idea of the dish. Aside from it being very delicious, this soup is also said to cure and prevent illness. It is even consumed in the summer months to restore nutrients lost in the heat.

After arriving, I ordered a simple dish of samgyetang, which comes with tea and few sides including cabbage and radish kimchi. They also give you a shot of a ginseng liquor. The soup itself was great and filling. The sides were good too. The ginseng shot was pretty strong and wasn't tasty at all -- but this obviously isn't the point! The experience set me back 15,000 korean won, or $13.28. Not bad! 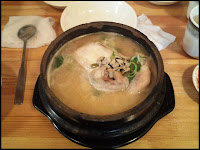 The restaurant has a touristy feel to it, since it's aesthetically nice and they had a host dressed up in a hanbok (Korean traditional dress) seating people. It's also a restaurant where the patrons sit on the floor to eat. That's something that looks cool from a touristy perspective, but it can get uncomfortable. In any case, the food more than makes up for it. I would definitely recommend this place to others. 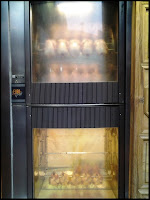 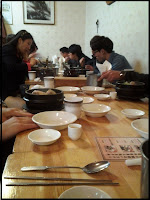 In other food news, my own cooking has been improving. This week, I made some bulgogi for the first time and made the best Korean style curry! I may be a bit embarrassed to admit this, but after finally finding some syrup (that didn't cost me an arm and a leg) I made my own french toast for the first time. It's very easy and I have no idea why I wasn't making it before!

At the beginning of the week, I was finally able to set up my cable and internet in my apartment. I can now say that my new apartment is complete.