Last weekend has been an eventful one for me.

At first, my heart was broken by someone and I was a bit upset, but luckily for me I was able to recover and I had a great time.

Cinco de Mayo at On the Border restaurant

It started with a simple Cinco de mayo get together at the On the Border restaurant located by Apgujeong Rodeo station. On this particular night, a group was able to buy out the restaurant for a get together. We were able to have all-you-can-eat tacos, burritos, chicken wings, salad and nacho chips. Not to mention a seemingly endless supply of margaritas! I tried a bit of everything, and I'm happy to say that the food was all great!

To those who might be concerned about the quality of the food, On the Border served us our tacos, burritos and salad with real salsa, sour cream and guacamole. The servings also had an acceptable amount of meat. Don't worry, I've been to my fair share of Mexican restaurants in Korea and have gone through the tragedy of paying a fortune to receive substandard food. Imagine paying more than $20 for a plate only to receive more lettuce and tomatoes than carne (meat/beef)? At On the Border, this is not so. I was also cynical about the margaritas ("Oh, they'll probably run out then serve only cheap beer...") but these surprised me as well. They truly meant all-you-can-drink and the drink was strong. They kept those coming too.

To check this place out, keep in mind that the restaurant is located in Seoul by the Apgujeong Rodeo station on the Bundang Line. After coming out exit #6, walk straight and make a left onto the first small street. Then, make a right into the first little alley way and walk down. The restaurant is located on the left.
Here I was able to meet some chill people and have good conversations.

Our next stop was club Answer in Cheongdam.

We took a taxi there, so I can't be sure of the exact directions, but the internet tells me it's close to Cheongdam station on line 7.
﻿﻿

We were a semi-large group of foreigners, and some of us were turned away at the door for lack of proper ID. To get in, be sure to bring a Korean-issued ARC or bring your passport. Foreign ID cards were not accepted. The price is normally 30,000 won (about $30), but I paid $45,000 for both the restaurant and the club as part of a package.
Everyone was well-dressed, though there didn't seem to be much of an official dressed code. One girl was able to get in wearing flip-flops.


On this particular Saturday night, they played electronica music. I would say that it was pretty good and I was able to dance to it, even as someone who prefers a different style of club music. The atmosphere was quite nice. I'm told the shots were pricey though (other people bought my shots personally~). Good news for men, the club was full of well-dressed women and there were few foreigners there. I was also able to walk right into the bathroom when I needed to, which is unheard of. That's not the say the bathroom wasn't full -- I had to push through waves of Korean women stuck in front of the mirrors!

Needless to say, I had a decent time with fun people. I eventually was able to take a taxi to gangnam station nearby, then I took the last bus home.

On Sunday, I met up with the same group of people from the night before and I was told about the friendship festival. I'd never heard of it. Our friend insisted that is was located at Gwangmyeong City Hall. So... about 3-4 transfers on the subway later, we were at Gwandmyeong City Hall, which is located in Gyeonggi-do. We get there and wonder where the festival was. Our friend then says, "Yes, it's by the statue of King Sejong!" To those who don't know, that's actually located by Seoul City Hall.
Due to my quick thinking, we found a bus that took us straight there. I was surprised when I got there. The festival was quite nice. I saw lots of families with picnic mats lying around and watching performances from a large stage. There was a good mix of Korean and foreign families there. 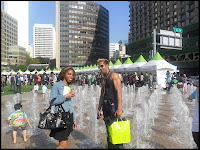 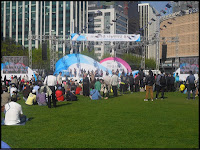 It was over a large area of what I suspected was fake grass. It was surrounded by tents full of cultural information and goodies from different countries all over the world. We didn't go through most of them, but just looked for a few select countries. The best part of it was the food! They had authentic cuisine and beverages from all sorts of countries. Not just snacks either, you could purchase full meals, drinks, dessert, etc.

I personally looked for the tents for Argentina and Colombia. I found the Colombian tent which served a bunch of different drinks and some staples. I wasn't particularly missing the food that much, so I didn't buy anything from there. Argentina wasn't represented, unfortunately.
One of us was really excited about visiting the French tent, and we picked up some pastries there. After that, we spent some time in front of the South African tent since a couple of us were from there. It was a pretty chill place, and I tried some South African cider for the first time! 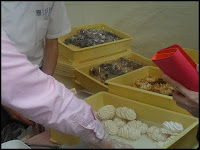 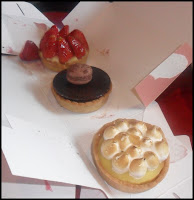 They had cultural events, such as art exhibits, music and a parade. It was very family friendly. We took a bus to City Hall station (line 2) and the fair was easily visible.
We then had a meal at a Dos Tacos location by the river. The location was a little awkward (in an alley way), but we were able to see the sign from across the street. The location we went to was close to Jonggak station on line one. It's about a 5 minute walk from exit #4. I ordered a delish garlic beef burrito. Yum!
Anyway, that was my weekend. Now it's time for me to get back to work!