When I first came to Korea, I learned about doing a temple stay. Temple stays, as I was told, offered a more unique and intimate experience with the history of Korea and Buddhism.

Basically, there are some temples in Korea where you can do a temple stay. There are options of staying for just a day, or staying for a night or two. In theory, you can sign up and go on your own, but that might be tricky if you're not fluent in Korean.

﻿
A common option is to do what I did, which was sign up for a temple stay with other foreign tourists and residents through a travel group or agency. These sorts of agencies make everything simple. I was able to sign up and send them money to confirm my spot. After that, all I had to do was show up at a location in Seoul at a certain time, and board a rented bus going straight to our destination. It's much easier because you don't have to deal with figuring out how to get there or even simply communicating with temple representatives due to the language barrier. A popular agency is Adventure Korea. There are also groups available on Meetup that do similar trips and organize temple stays.

﻿
I did my own Temple Stay at Magoksa Temple (Korean: 마곡사). It's located in Gonju city in the Chungcheongnam province. I went with an agency now called Wink Travel and Culture Group with William Cho as the organizer. I actually wouldn't recommend them, as I've had a couple of negative experiences with the group related to two different trips. I'll explain that later. The Magoksa Temple, however, was wonderful... I would certainly recommend doing your stay here. To clarify, I went when I first arrived to Korea back in 2010.
To learn more or organize your own trip yourself, go here for contact information and instructions on how to get there. It's a bit of a trek from Seoul, but it's not too bad or complicated.

The Program
﻿﻿﻿﻿
﻿﻿
I signed up for an overnight program and went with other English-speaking foreigners. The program itself was well organized. As soon as we arrived, we were greeted and taken to a building. They gave us name tags and we changed into temple clothes. The only downside was that the temple employees who were there at the time didn't speak any English. As a result, the organizer of this specific trip translated everything for us, which was nice.

Without going into extreme detail, we followed a schedule and did various activities. They gave us a tour of the temple grounds, we learned more about Buddhism and they taught us the basics of activities such as meditation.﻿

They showed us and explained the significance of different shrines, including Buddhist art. We were able to do some arts and crafts as well. We went on a very nice hike beginning early on the second day, where we followed a monk by a stream and into the mountains and the countryside. We ended our stay with a tea ceremony where they served the most delicious fresh fruit. The experience felt authentic and spiritual. 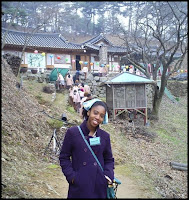 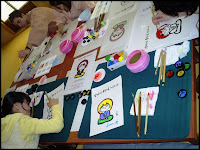 I went in the spring time, so it didn't have truly warm weather. If I were to do things differently, I would have brought extra clothing to wear under the outfit to keep me warm at night and in the early morning. They also fed us a basic meal a few times. The food was a bit bland (rice, sprout soup, kimchi and rice cakes), as it was supposed to be. In turn, it wasn't very filling and some of us left a bit hungry, not having a chance to eat a meal (other than ice cream) until getting back to Seoul. A good thing is that the temple does provide lockers for your belongings, and they also give free time. A smart thing to do is to bring an extra sandwich or two, and eat the food during your free time to help hold you over. A couple of girls did that on our trip and I thought that was smart.

Overall, I had a wonderful experience and I would recommend a temple stay to anyone that visits Korea. I would also recommend staying overnight. I think it's truly worth it.

After finishing our stay at the temple, we hopped back on the bus, which then took us to Cheonan, where we visited Independence Hall (Korean: 독립기념관).

Independence hall is a Korean history museum which tells the full story of the Japanese occupation of Korea, and how the country reached its independence from colonial rule in 1945. In other words, it's a story that all Korean children learn.

It's a large museum on large grounds. The monuments were impressive, in my opinion. The exhibits were also very detailed and in English. They have tour guides available. Unfortunately, we fell behind schedule and didn't get a chance to spend much time at the museum. I tried to read as much as possible, since I didn't know much of anything about Korean history until I arrived for the first time.

Cheonan may be a bit out of the way, but I think it's worth the trip for anyone who has extra time, and/or is interested in Korean history.

I had a fine trip with the Wink Travel and Culture Group, but it was what happened after that put me off. I posted about my positive experience about this temple stay on their facebook group awhile back. I also said that the temple had lockers, and that the more resourceful people brought an extra sandwich or two with them, storing them in the lockers.

After a couple of would-be travelers asked me questions, the organizer quickly removed my post and put up another, personally insulting me by suggesting that I was uncultured and despised Korean food. In addition to that, they blocked me, effectively preventing me from defending myself. I thought that it was an extreme overreaction, not to mention rude.

I have also had a bad MudFest experience with the same group. That time, they spoke with me with a rude tone on the phone when I asked them for the address or directions for the hotel that I had paid for. Unfortunately, they seemed angry that I would even ask for that information. When everything goes smoothly according to their plan, then they're alright. Otherwise, they can be petty and childish with their dealings. That's why I wouldn't recommend the Wink Travel and Culture Group. This was a while ago, so hopefully they have developed better customer service skills in the meantime. While they are an option, there are so many other travel agencies out there that also serve foreigners.
Posted by Little Lady at 11:34 PM