Not too long ago, I met a new friend at the Cinco de Mayo party that we both attended. He happened to be from South Africa, and he invited me to an annual get together for South Africans (and friends) in Seoul.

The event was a big barbecue where folks brought their own food and drinks. They cook, eat, drink and have a good time with friends. That reminds me of what I used to do with my own family in the USA, so I couldn't wait to attend.

Unfortunately, the South African friend who sent me the invitation ended up double-booking and wasn't able to attend. I was on my own! I ended up inviting a few of my friends to the event and met them there.

The event was held at Nanji Hangang Park (난지한강공원), at the camping site (캠핑장). The closest subway station is the World Cup Stadium station on line 6. In theory, one can walk there from the subway station in about 20 minutes by supposedly leaving out of exit #1 and following the signs. However, after talking to people who attempted to walk, it seems like it's very easy to get lost... and one of these people was Korean. The easiest way is to take a taxi. I took a taxi from Seoul Station which cost about 8,000 won.

We brought some of our own food. I prepared and brought chicken, salad and macaroni and cheese. My friends brought various other things. Luckily for us, I was able to get in contact with someone else to hold a spot for us. One man helped me get started, and I was able to make some BBQ chicken. Their grills were nice and easy to use. It was probably my second time being responsible for working the grill, so I was excited! 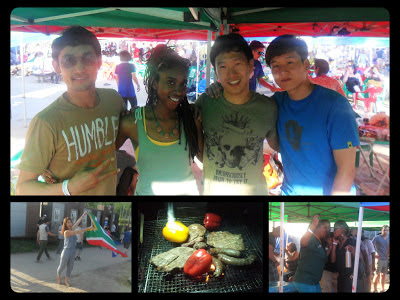 Sadly, two of my Korean guests ended up leaving due to culture shock. They had never been to a barbecue before and were put off from eating the strange food. I also hadn't realized that they were not used to being around foreign people. That made them afraid to branch out to the other party goers. As a result, they went home early.

Nanji Park was pretty well equipped in my opinion. Although there were lots of people there, it didn't feel crowded. They also have plenty of bathrooms and washrooms if you need them. We were easily about to rent more chairs for 1,000 won each. The tables were cheap too. They even had little wagons to help you move your things if you couldn't carry them. The gazebos got the job done! They also had lanterns for after night fall. I would definitely recommend the park as a venue for an event.

As for the annual South African Braai, that's recommended too, even if you're not South African! While my only friend from the country wasn't able to show up, I still had a splendid time with lovely, friendly people. I tried some good food as well. It's worth it, even if it's just for the lamb chops. Yum!
Posted by Little Lady at 5:53 PM